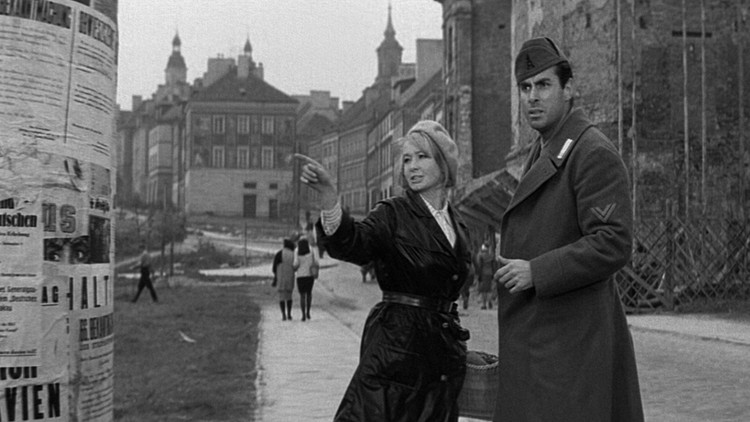 A farce of the Polish occupation reality. A big dose of humor.
The Italian soldier Giuseppe Santucci, on his way home from the Russian front, during World War II (in 1943), has his machine gun stolen in Warsaw. Afraid of consequences, he stays in Warsaw in a flat of the Polish girl Maria, whom he suspects of stealing the weapon. Maria indeed is an active member of the Polish resistance, contrary to her brother, Staszek, a painter, who only wants a calm living. In a course of funny events, Giuseppe falls in love, and, along with Staszek, becomes a hero of the Polish resistance.
This black and white film is considered the best of the Lenartowicz’s films. The director was praised for his courage to make a light sparkling with humor film that deals with the dark times of the war.

The cast is fantastic: Zbigniew Cybulski (Polish “James Dean” known to American audience mainly from his very serious role in Wajda’s “Ashes and Diamonds”), Elżbieta Czyżewska (called „Cybulski in a skirt”) as well as the Italian actor/journalist who plays the title role of Giuseppe, Antonio Cifariello.
In an interview for “Kino” magazine Stanisław Lenartowicz explained his motivation to make this film:

“I wanted to make a film that portrays the times of occupation differently. There were many films treating the subject very seriously, full of martydrom, but I thought that it is time to show that Poles drew their courage and moral strength from their sense of humor or even from playing pranks on the enemy. In a way, humor helped to protect the society from a complete collapse. Poles refused to be psychologically squashed and used their sense of humor to keep a distance from the horrors and danger around.”

Polish Monthly Film Series details are here.
Back to the Top